Home › Hosting stories › What to do with whiny guests

I have some friends who decided to start the Airbnb hosting adventure a few months ago.

It’s been a nonstop parade of bad, whiny guests ever since they started.

My friends have become understandably frustrated and disheartened. They want to be good hosts, but can’t seem to get reasonable people to book their space. What to do?? 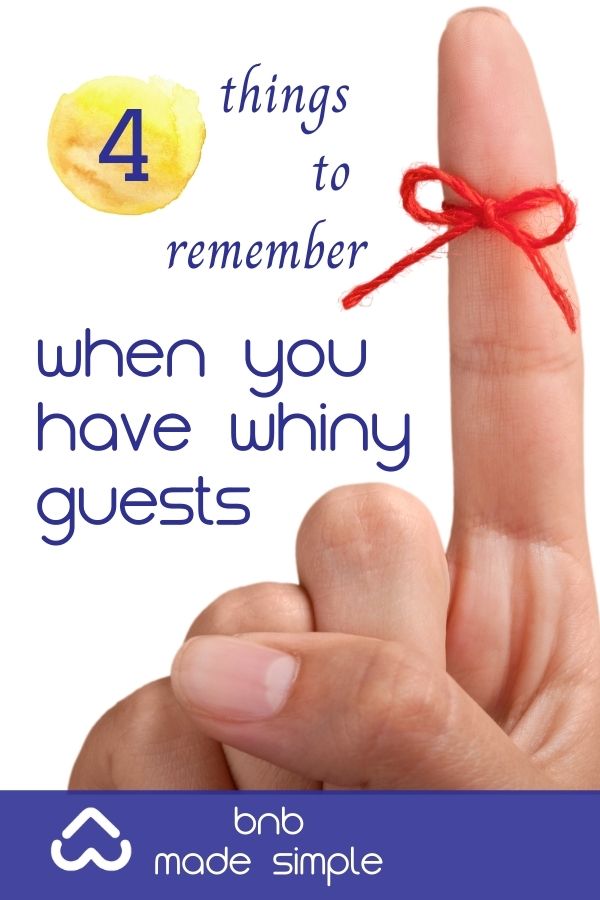 First of all, it’s important to remember that this is not uncommon.

If you find yourself in a similar situation (and are actually trying to be a good host!), don’t lose heart. It’s common for new hosts to get bad reviews and complaints in the beginning, while they are getting all of the kinks of their space worked out.

Second, listen to the criticisms.

I know it’s hard to hear complete strangers saying things about you and your space that they don’t like. But they might have some legitimate concerns. Take their comments seriously. Those little quirks you never think about anymore may be a serious inconvenience for people who are only staying a couple of nights. My friends improved a lot of things based on the feedback they got from unhappy guests, and their space is so much better because of it.

Sometimes guests are just looking for something to complain about. This is unfortunate, but nevertheless an unavoidable fact. Don’t let all of the negative comments get you down. If guests are complaining about silly, trivial issues, or perhaps things that aren’t even problems, but simply a matter of taste, don’t take it to heart. Those sorts of comments are not a reflection on the hosts, but rather the guests themselves.

No matter how amazing your space is, there is always something you could do to make it better. Even after years of hosting, I still change something after almost every guest. Be humble and open to suggestions; that complaint you received may give you an idea for a great amenity to add!

I love chai tea, swing dancing, and the quirks of our amazingly-complex English language. I'm also a passionate teacher, writer, host, and learner. I combine all those traits (well, maybe not the love of chai!) to help people strengthen their "hospitality muscles" and become amazing hosts. I'm looking forward to working with you!
Read More

Affiliate Disclosure: As an Amazon Associate, we may earn commissions from qualifying purchases made on this site.